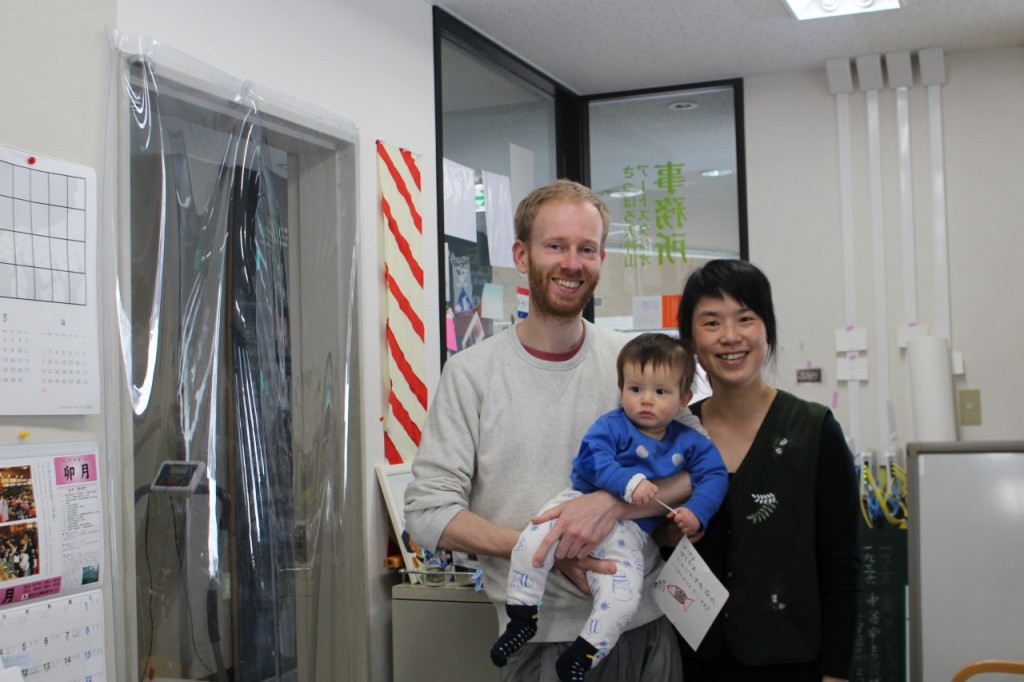 Ricky(left), ManHong(right) and beautiful boy Kyon is in the center.

They'll stay 3 months in Tenjinyama. Please come to meet them!

They do research and do creative activities.

Ricky Doornbos uses documentary photography as a means for doing visual research. With an interest in local historical events, Doornbos investigates how various histories are manifested and interpreted in the broader scheme of contemporary globalization.

For his stay at Tenjinyama, Doornbos uses the 1936 grand tour undertaken by the Japanese Emperor in Hokkaido as a point of departure. It was a large scale military exercise and Imperial propaganda tour in order to bind the local people of Hokkaido to the Empire. It was to be the Emperors last tour with the divine status as Ikegami, or living kami.

Opposed to this story, during the same period, a mountain suddenly emerged in the midst of the Hokkaido fields. It was dubbed Showa Shinzan, named after the period during which Hirohito served as Emperor. The Japanese authorities were extremely worried that it might be interpreted as an unlucky wartime omen, so it’s existence was kept secret. As a result, scientists could not study the eruption. A local postmaster however found the mountain growing in nearby farm fields and he started documenting the mountains progress. After the war, his work was praised by professional vulcanologists. He is now honored by a statue at the base of the mountain and his work is celebrated in a memorial hall near the site.

For this project, Doornbos wants to learn more about how photography helped shape a certain mythologization proces that is strongly connected to the traditional Shinto belief. Myths are very much culturally bound, so that his research at Tenjinyama will focus on Shinto and the various branches of Japanese popular culture.

ManHong Lam works as a conceptual designer, researching the motives, emotions and thoughts that drive man to certain actions. With an emphasis on craft, she imagines her findings into objects and installations.

For her stay at Tenjinyama Art Studio, Lam plans to investigate traditional Japanese stories and myths that may or may not form a groundwork for how the local people interact with objects.

Her goal is to capture an image of the interrelation between objects and man.

Kyon is traveling with his parents. He has a wide range of interests such as ropes, snow, crunchy bread and astrophysics. During his visit Kyon means to learn more about the art of walking and speaking languages such as Dutch, Cantonese and Japanese.